In NPR's Hidden Brain podcast, Chris Blattman and Sara Heller explain what evidence can tell us about a more holistic response to crime reduction; by providing much-needed resources to those at risk of committing violence. Heller discusses her research on an experimental program aiming to reduce Chicago's murder rate by providing high-risk men with job training and therapy on de-escalating and avoiding violence. Blattman shares findings from an IPA study in Liberia that helped inform the Chicago program, evaluating the impacts of providing cognitive behavioral therapy and cash grants.

Upworthy cites the 10-year follow-up of a Liberia study that found that giving young men in high-risk situations $500 worth of therapy and $200 cash helped reduce crime in the long term. As researcher Chris Blattman notes, “The therapy helped participants change their intentions, identity, and behavior and provided almost daily commitment and reinforcement" while the cash grant allowed men to maintain this progress.

Chris Blattman writes in the Washington Post about his study, co-authored with Margaret Sheridan, Julian Jamison, & Sebastian Chaskel, and conducted with IPA Liberia. The study evaluated the Sustainable Transformation of Youth in Liberia program, which provided cognitive behavioral therapy (to which the researchers also added cash grants) to young men at risk of violence and crime. Professor Blattman reflects on the origins of the study, and the implications of the 10-year follow-up which showed sustained reduction in crime for the young men who went through the program. Vox reports on the recent release of the 10-year follow-up of a Liberia study which offered cash and cognitive behavioral therapy to young men at high risk for crime and violence. After tracking down the 999 men 10 years later, they found lower rates of crime among participants, at a cost of about $1.50 per crime averted.

In the Atlantic, Reasons to Be Encouraged about Potential for Peaceful Co-existence
Media Coverage

Researchers Dominic Packer and Jay Van Bavel write in the Atlantic about research showing that group conflict isn't the inevitable destiny of humanity. Amongst the optimistic research they cite is Salma Mousa's study supported by IPA showing how interfaith soccer leagues in post-ISIS Iraq could reduce tensions between Christian and Muslim players.

The University of Pennsylvania's Penn Today covers the results of a paper in Science on evaluations of community policing practices in several countries, including an IPA study in Uganda. This article interviews researchers Guy Grossman and Dorothy Kronick on the findings.

Washington, DC—Demobilized Boko Haram militants facing reintegration might be helped by supportive messaging from religious leaders, according to a study released today. The study, conducted in northeastern Nigeria, where Boko Haram is estimated to have killed tens of thousands and displaced millions, found that radio-style messages from a respected local Muslim religious leader focusing on forgiveness significantly increased community members’ willingness to accept demobilized fighters back home.

The study, published in the Proceedings of the National Academy of Sciences, comes as...

In news24, the Impact of COVID-19 on Zambia's Elections
Media Coverage

Zambia's news24 cites IPAs RECOVR survey of economic conditions in the country in coverage of factors affecting voters there.

Recently, in joint work with Ana María Ibáñez, Andrés Moya, María Ortega, Marisol Rodríguez, and field support from IPA Colombia, I have been working on a research project that examines the effects of a large amnesty on migrants’ lives. The context of the study is the opportunity of regularization of approximately half a million Venezuelan refugees in Colombia, known as the PEP program (Permiso Especial de Permanencia). To execute the project, we collected phone surveys of regular and irregular...

Editor’s note: For the first time, Sesame Workshop unveiled two new Muppet characters designed to resonate with Rohingya refugee children in Bangladesh as part of its Play to Learn program with the LEGO Foundation, BRAC, and the International Rescue Committee. It made news on NBC’s Today Show, the New York Times, BBC, and elsewhere.

You can see the NBC News video below. We spoke with Sneha Subramanian of IPA Bangladesh about IPA’s role in research behind the twin characters, Noor and Aziz.

Can you describe the research behind the new Muppets? 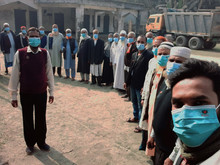 A research project we couldn't have anticipated a year ago is looking at how to encourage community mask use in Bangladesh. Credit: Abu Raihan, Innovations for Poverty Action

There is no need to expand on why 2020 was a challenging year, and how scary the beginning of 2021 was. And there are certainly many difficult months (even years) ahead of us in managing this pandemic. Yet despite everything that 2020 (and now 2021) has thrown at us at IPA, we have seen how resilient our community of staff, partners, funders, and researchers has been, coming together to leverage...

The Economist writes that despite challenging conditions in Lebanon—an economic crisis, the coronavirus pandemic, and the scapegoating of refugees—many Syrian refugees living in Lebanon intend to stay. The article cites a study that found a majority of Syrian refugees in Lebanon plan to stay for the foreseeable future, a decision that is more significantly influenced by conditions in Syria than Lebanon.

BBC News reports on Sesame Workshop using Rohingya muppets to help deliver educational and developmental messaging to refugee children in Cox's Bazar, Bangladesh. IPA worked with Sesame Workshop on research to inform the design of the two muppets, Aziz and Noor, and develop educational content that would resonate with kids and families in the world's largest refugee camp.